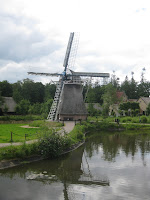 Windmills are big machines that rely on the wind to work, they are used for pumping water, grinding grains, and making electricity. The first windmill was built by Heron from Alexandria in the first century AD and was used to power organs, that was the first time wind had been used to make energy. In Holland windmills had many uses, especially for draining the land. 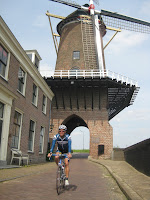 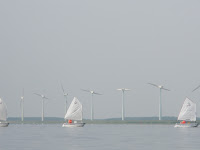 When not being actually used to drain land or to grind flour, windmills also make for nice pictures! There's Daddy riding through a windmill near Amerongen, and the more modern wind turbines for electricity near Spakenburg. Daddy rode right under them, and was amazed at how fast the blades turned and how silent they were.
Posted by Anonymous at 13:03