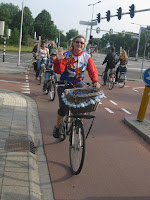 Beyond windmills and clogs, bikes are the things people probably most associate with Holland, and for very good reason - they're everywhere! It really is amazing to see how ingrained, pervasive, and ubiquitous cycling is as a means of transport here. It is so completely unlike the attitude towards cycling and the way it's integrated into urban planning in North America, or really anywhere else. I mean, many cities now have bike paths, but nobody does them like the Dutch. Bikes generally have right of way, and there are separate lights and clearly marked direction signs all over. 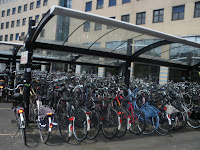 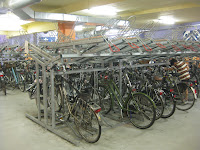 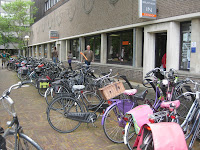 Cool Dutch Cycling #157: Bike racks are EVERYWHERE! I've written before about the masses of bike racks at every train station in every town, and also the FREE underground parking in the town of Amersfoort and elsewhere. But it's not just the "city" implementing these, libraries (right) and pretty much every store has loads and loads of bike racks outside their premises. 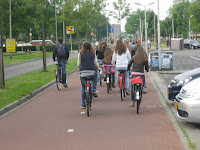 Unlike North America, cycling isn't an "activity" or "exercise," but just a way to get around. On the right I took this picture in the midst of "traffic jam" of kids biking to school and people getting to work in Amersfoort. And while it's hard even for a dedicated bike commuter like me to think of riding to the Fonthill library without finding my bike shoes and such, there's no such qualms here and you just roll along in your normal street clothes. Or in the case of the girl hitching the double on the left, your big 6" spike heels! 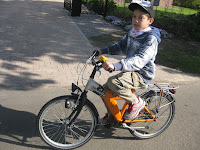 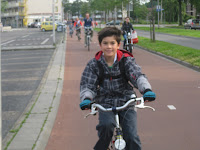 The entire country really is one big bike path, as there are separated bike paths alongside pretty much every road and even main arterial roads. So there's very little worry about cars and we've been pretty comfortable even going without helmets. Really, for any errand or trip of 10 km or less, it really doesn't make sense to even think of a car.
Posted by Unknown at 09:21