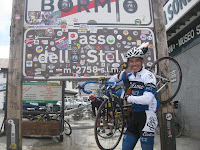 There are many amazing climbs in the world of cycling, but the Stelvio (2,758 m, the highest pass in Italy) is definitely among the top 5 in the history of the sport. I was lucky enough to ride it during the PezCycling News 10th birthday party bash at the end of May, only 5 days after the Giro d'Italia finished Stage 20 atop it. There are 3 ways up  the Stelvio: 1) Bormio (1,225 m, the way we and also the Giro did), 2) Umbrail from Switzerland, and 3) Prato from 900 m.

Our Pez story on the awesome Hotel Funivia 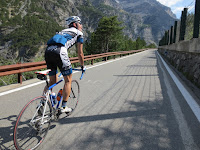 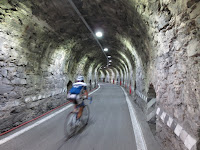 The climb just goes on and on. It's 24 km or so of climbing from Bormio, including a few very narrow tunnels that have only recently been lit. There are 40 switchbacks too from this side, and 48 from Prato. From the Bormio side, it's never so incredibly hard that you're grovelling (although there's one stretch at 14%), but it's just relentless and gets really hard with minimal oxygen as you approach the summit! 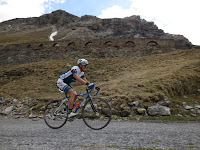 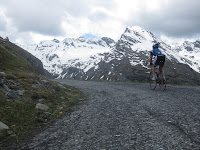 We started in Bormio on a beautiful sunny and warm day, and it gradually got cooler and cooler as we ascended. Partway up, Rich and I found a part of the original road that was still roughly paved, so we figured it was a fun shortcut to take what we called the "Strade Fausto Coppi!" 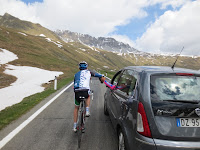 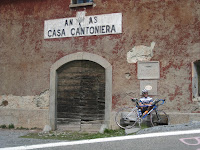 On hard mountain stages, the directeur sportif in the car hand out water bottles to riders struggling at the back, and the pro cyclists are sometimes known to hang onto the bottle a bit longer than decent as the car continues to drive along, a trick known as a "sticky water bottle." So since pro rider Davide Vigano (Lampre-ISD) was driving Rich's rental car to the top, we figured it'd be fun to have a pro cyclist giving Rich a sticky bottle! On the right I'm enjoying the sun and the climb at one of the buildings on the climb. 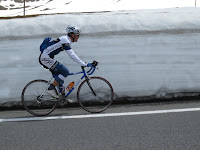 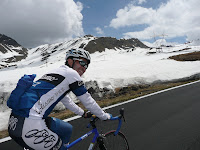 Yes it's the last day of May, but there's still acres of snow near the summit. Indeed the pass usually only gets opened about this time each year.It's apparently snowing there now in mid-June! I'm about 1km to the summit on the left. Like Joaquin "Purito" Rodriguez, I tried an attack within 1 km to go but, unlike Purito, I blew up about 50 m later! 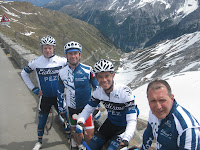 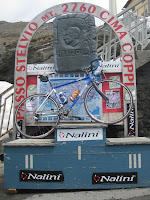 The Pez boys (Gord, Rich, me, Leslie) atop Stelvio with the route towards Prato behind us. Check out all the switchbacks! We drove up from Prato from Verona airport, and it's just dizzying. On the right is my beloved Ritchey BreakAway on the podium and monument dedicated to Fausto Coppi, "Il Campionissimo." The Ritchey has really served me so unbelievably well in all my travels, from the cobbles of Roubaix and Flanders to the epic climb of the Stelvio! 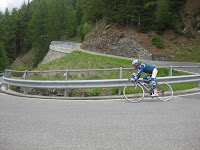 Of course, what goes up must usually come down too, and we had a blast of a descent down the Umbrail side to Switzerland. Wicked fun switchbacks and even 2 km on dirt roads. Here's Rich carving a turn. From the bottom, we continued to fly down this gradual downhill towards Prato, where we got picked up by Marco and the gang from Enjoy Garda hotel for the second half of our birthday party along Lago di Garda! Buonissimo!