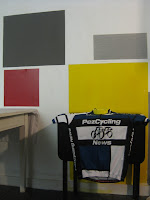 You never know where you're going to bump into something famous. In terms of Dutch masters, there's peerless artists like Rembrandt and van Gogh who shaped the art world. But if you're looking at artists who impact the look of the real-world, a case for a true master can definitely be made for Pieter Cornelius Mondriaan, born right here in Amersfoort in 1872 (died 1944). During the 1920s, while living in Paris, Mondrian (he changed the spelling in the early 1900s), began this "neo-plasticism" style featuring white, black, and the three primary colours in stark geometric patterns. 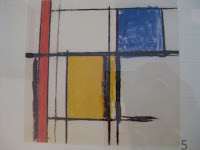 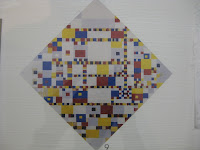 Recognize the style? Since his death (spent the latter years in New York), the Mondrian style has been very influential in many ways in industrial and graphic design, not to mention popular art. This graphic style has influenced Yves St. Laurent dress design and copied by L'Oreal for a line of hair care products. And for cyclists, you will know this style for the famous jerseys of the La Vie Claire team of Greg LeMond, Bernard Hinault, Andy Hampsten, Steve Bauer, and Jean-Francois Bernard in the mid-1980s.
The Mondriaanhuis is located in Amersfoort, in the house where he was born and lived until the age of 8. The main floor featured a room devoted to Mondrian's work, along with a recreation of his Paris apartment and studio. The top floors had art by artists inspired by his style. And hey, how could I not bring the Mondrian-Pez jersey to its spiritual home?
Posted by Unknown at 10:18