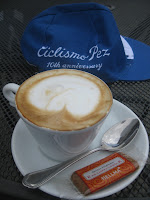 It's crazy to think, but our website www.pezcyclingnews.com is celebrating its 10th anniversary this year, which is just phenomenal in the internet age. To mark the occasion, Rich Pestes organized a week-long party in northern Italy for our crew, consisting of 3 nights in Bormio (heart of the mega-climbs Stelvio, Gavia, and Mortirolo), followed by 4 nights on Lago di Garda. Yes, it was exactly as awesome as you may imagine, cycling with best pals you've never met over mythical Italian roads.

Our first Pez story from Bormio 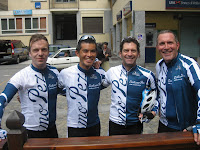 As I wrote above, the internet age means that, despite 10 years with Pez, most of us have emailed for years but never met. I've met Rich a bunch of times in Vancouver and stayed with Charles once in Phoenix, but that's been it. But the cool thing with our site is that our personalities really come through in our articles, so besides the common link of cycling and Pez, it was immediately as if we've known each other for years. At Bormio, there as Pez, me, Leslie Reissner (Canadian consul in Dusseldorf, Germany, and our literary scribe), and Gordan Cameron from Scotland. We shared the hotel with an eclectic and fun group of Aussies, Belgians, and Americans, so it was a really great time riding with everyone. 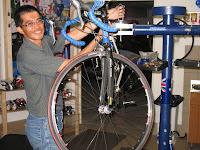 Bormio, right up north just on the edge of Switzerland, was so very awesome. We stayed at Hotel Funivia with our hosts Daniele and Giacomo Schena, who run the hotel as a specific Bike Hotel catering to cyclists from Europe, Australia, and America. D&G are both incredibly fit and keen cyclists, so they really know what makes things click for a cycling destination. There's a very well-stocked bike room downstairs, and it was a treat to build up the Ritchey with a nice facility after a year of putting it together in small rooms with no tools or racks! 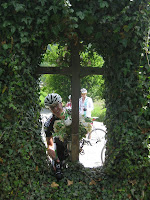 There's also daily free bike laundry, so you can literally get by with one set of kit! The hotel was started by Daniele's wife's (Elisa - former member of Italian national ski team) grandfather in the 1950s, and it's really cool that it's a family business that everyone shares in. The whole family's incredibly athletic - Giac's wife Barbara was also at the 1992 and 1994 Olympics for short-track speed skating. As I said to both Giac and Daniele, "You have an easy job to love!"
Beyond the hotel, things get only cooler. Daniele and Giacomo lead daily group rides that are fully supported, with a big sag wagon following where you can stash extra kit and they have water, tools, and a ride home if needed. 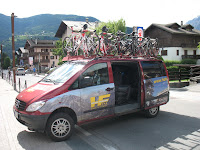 Each night the next day's route is laid out in advance, and you can but aren't forced to join. Being keen cyclists, they know pretty much every path and road in the region, so there's no need to do it yourself. The rides are also the cool kind of rides, good hard rides but also with lots of time to stop for pictures and great Italian coffee throughout the day. Of course, there's also a huge buffet breakfast each morning, ride food prepared for you, and a cafe time back at the hotel. 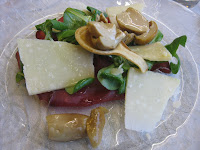 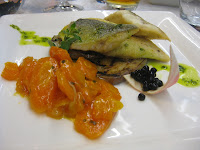 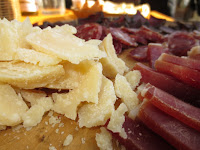 A huge "Grazie Mille" to Daniele for setting me up with a spare Specialized Toupe saddle after I arrived to find my Fizik Arione cracked down the middle!
Posted by Unknown at 11:15