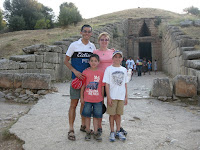 Today was another hot day in Nafplio, although my colleague Julien Periard working at Aspetar in Qatar would disagree. We spent the evening on a tour of the ruins of the ancient city of Mycenae (Greek = Mi-KEE-nas), about 20 km away and dating from 16th Century BC. Those familiar with Greek history probably remember Mycenae best from King Aggamemnon and the launching of the Trojan War. Behind us is the "Treasury of Altreus" burial tomb. 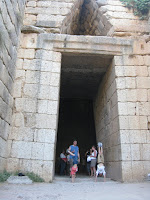 Handstands on top of a large "beehive" burial mound just outside the main walls of Mycenae on the left (the boys especially impressed the Japanese contingent with their handstands!). The mounds are so old that the later inhabitants built a 5000 seat theatre on top without even realizing its existence! It was only discovered in early 1800s when an earthquake knocked things around. Handstands on the right at the "Treasury of Altreus" nearby, another immense beehive burial mound (named for its shape). The lintel (big huge slab on top of the archway) is 125 tonnes! 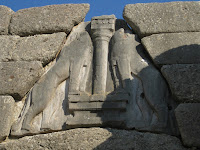 The Lions Gate archway into Mycenae, the oldest sculpture in Europe and weighing 18 tonnes. Interesting story we learned. The very ancient Greek mercenaries who fought for the Egyptians were paid in, among other things, large ostrich eggs and also elephants. The latter were brought back to Mycenae to help with hauling the immense rocks for the fortress. There not being any vegetation nearby (citrus trees dominate the valley, but were only planted in the 1960s), they didn't live for long and their bones are all around. Think to the myth of "Cyclops" massive one-eyed beings with huge arms near the middle of their bodies. Now think of what an elephant skeleton, with a massive nasal hole in the skull and huge front limbs, who later Greeks would never have seen alive locally... 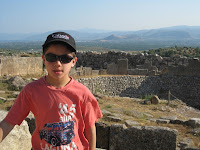 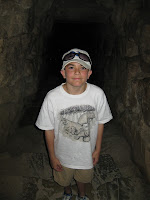 Jacob in Mycenae overlooking the Agoran valley below. Huge rock mountains on both sides of the fortress. Zachary in a tunnel in the fortress leading to an 18 m deep cistern for water. 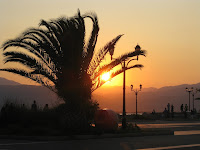 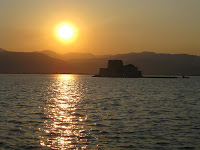 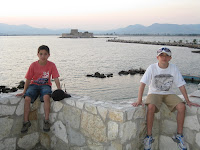 Beautiful sunsets each evening in Nafplio. On the right above there is the Venetian fortress "Boutzi" just offshore. We finished the evening strolling the seawall around town to the beach on the other side, then back into the town for a gelato for supper. Too hot to consider eating!


Today was another hot day.
Posted by Unknown at 05:23