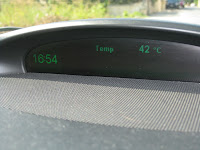 Another wonderful day in Crete spent at the beach. Check out the photo of Andreas's car thermometer! We spent yesterday all morning playing at the villa's pool. The boys can't get enough of the pool and beaches here, and luckily that's what Crete has in abundance. 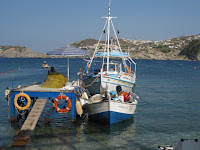 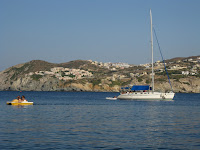 Yet another beautiful beach in Crete. Not the first one we'll visit, and not the last!
Well, whether we were hungry or not, it was time to perform yesterday, as we were invited by Andreas's parents to their place for lunch. As you can imagine, it was not a small spread! We hosted Andreas's parents and aunt in St. Catharines when he brought them over for his convocation in 2008. They didn't speak any English, so Andreas was busy playing translator and keeping conversation going on both ends of the table! There was this terrific rice dish along with pastries, really tender meat, and lamb too. Debbie and I are just astounded at the amazing flavours of the vegetables (especially tomatoes in the Greek salad) and fruits compared to what we get in Canada. The honeydew and bananas were especially amazing. They have olive trees at their property that they also use for oil.

Debbie and I can't get over how much marble and stone there is here that is used for flooring. Of course, I was also cursing the use of hard stone and marble because I killed my new external hard drive by dropping it on the floor at the apartment. Luckily it's all just backup stuff and nothing ultimately lost. 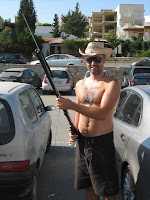 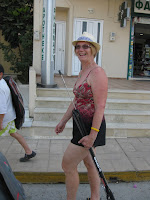 Wandering around the streets with a spear-gun. No this did not result in the next picture below... 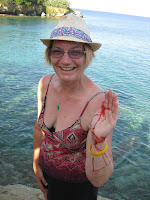 After lunch (which started at 2 and ended at 5 pm!), we went over to a remote beach on the west side of Iraklios.You have to climb over some rocks and then finally swim over the final stretch, which the boys thought was cool beyond belief. There were some nutbars taking the shortcut and jumping off a 2-3 m ledge into the water, which is just crazy considering that the water was only about 5 ft deep and there were rocks in parts. That wasn't the only danger, as seen with a little run-in Debbie had with the local flora on the way to the beach. 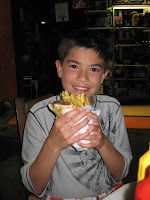 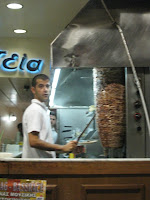 Later that night (afternoon in Greek time!), we wound up down in the city centre again with another pita gyros for dinner. Can't get enough! And for Uncle Crabby, they DO have Pita Kalamari here for around easter time!
Posted by Unknown at 09:52