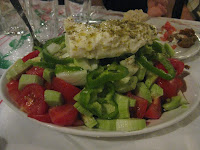 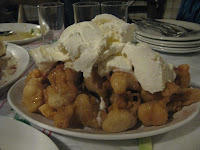 Wednesday night, Andreas took us to his father's village (Turkish name for the village means "good coffee"!), up in the hills about halfway between Iraklios and Rethemnos. The village is tiny, but the food amazing. The tavern we went to is run by his 4th cousin and is famous for its pork dish, to the point where it's impossible to get a table in the weekends, especially in the winter. It's so popular that about 5 other restaurants opened to accommodate the overflow! About 80-90% of the food is grown on the premises. Check out the massive slab of feta on the Greek salad! On the right is "loukamales" a Greek dessert of fried dough slathered in honey and topped with ice cream. A certain 9 year old was in hog heaven! 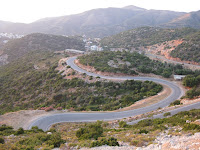 The roads inland are insanely awesome for cycling, and I'd love to come back some day in the "winter" and ride them. Tough climbing with lots of switchback and the random large rock falling down and landing on the road, plus goats wandering at random. 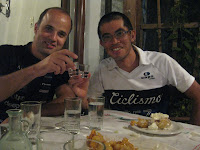 I'm very rapidly taking to the Greek lifestyle: a permanent 3 day stubble and a dark tan helps! Other notable adaptations included taking >1h to drink my freddo cappuccino on the way to Rethemnos, something I constantly harassed Andreas about at Dal. Seeking shade whenever outside has also become instinctive, not to mention a matter of survival! Not about to ever get used to the raki (ra-KEE) fire water though. 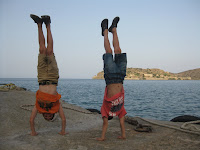 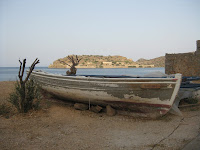 Two shots of Spinalonga island on the northeast side of Crete. It was a Venetian fortress for a long while, and also a leper colony in the 20th Century up to 1957. We spent Thursday evening there at Elounda and also Plaka, two nearby towns. 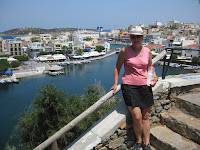 Debbie at a viewpoint overlooking the lake and port (beyond) of Agios Nikolaos.
Posted by Unknown at 07:19