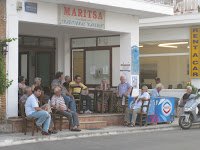 Yesterday we went to three towns and a beach. The first town was called Agios Nikolos and we walked around the lagoon there. Next we went to Golden beach. It would have been perfect for the rackets but Andreas didn't come today because he had to do something else and we forgot to ask for the rackets. After the beach, we went to the second town called Plaka. There we walked along the shore. and we could see an Island called Spinalonga, where there was a leper colony until 1957. Here's a picture of the social life in small town Greece. 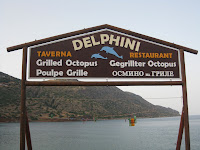 The third town was called Elounda there we had dinner which was two pita gyros and one gyros portion which had salad, gyros, pita, fries, and tzatiki. This sign shows grilled octopus in several languages. The clothespins are to hang up the octopus, but they must have all been eaten! 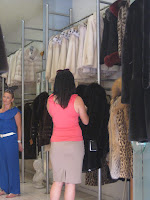 On the left some women are trying on furs when it's 39oC outside! There are a lot of fur shops all over Crete, seemingly catering to Russians as all the signs are in Russian. On the right there is a dried puffy puffer fish. We haven't seen any in the water yet.