We're Vikings Whaddaya Know the Terrors of the Seas! 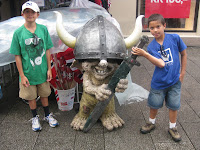 The rock jumping was actually yesterday now we started yesterday with some swimming (and jumping) then we went to downtown and went to the viking museum which is on a peninsula called Bygdoy we spent about 3 hours there. then walked to the ferry terminal where there are 3 museums the Fram Museum, the Maritime Museum, and the Kon-tiki Museum. then we took the ferry back to the to the city hall where the nobel Peace Prize is given and to get to the metro station we went past the church where most of the roses are.then we came back home and had dinner with Olaf before he went Tango dancing.
Pictures of Vikings - Arrrgghhh!!!
Note: Please comment below on anything you find interesting! We'd love to hear from you and will respond! 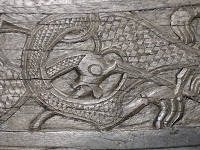 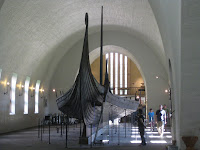 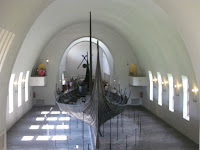 My historical note: Vikings came from Scandinavia they are mostly farmers and are only part time pillagers. their helmets actually don't usually have the horns like in the movies they only have the horns at parties. the vikings pillaged to trade and capture slaves. the society had the nobility the free men and the slaves. the three ships at the museum were sailing ships that were used to bury the nobility one was used to sail for luxury, a second was a working vessel (of attacking), and the third was hard to tell because it was mostly deteriorated when they found it. the names were Oseland, Gokstad, and Tune in the same order as above. they were named after where they were found. when they found the ships they had been robbed. but they have part of the skeletons from the Oseland (two women) and the Gokstad (chief who was killed in battle) And the Tune (another chief). they still found lots of objects on the burial mounds even though they were robbed they were buried with food, sleds, animals, carriage, even peacock feathers, (and lots of other little odds and ends. 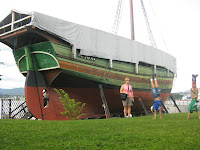 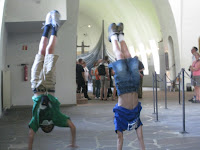 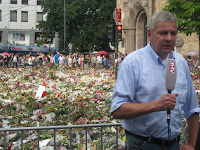 Daddy's Note: The ferry stop on Bygdoy is at the Fram Museum, where they have placed the Gjoa (upper left), the boat that Roald Amundsen used to sail the Northwest Passage for the first time beginning 1903. Walking through Oslo Centrum, everything looks "normal" in terms of everyday life until you get to the National Cathedral and the area blocked off around the bomb site. At the Cathedral, a large street is blocked off with flowers and tributes about the tragedy. It was raining when we got there, matching the overall mood. It's obvious that all of Norway is in shock. I can only wish the country well in its mourning and healing.
Posted by Anonymous at 20:49