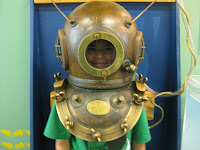 Last weekend here in Vancouver before we take the "plunge" to Europe! We spent the afternoon at the Maritime Museum down at Vanier Park. Besides the centrepiece of the St. Roch (say it like "Rock"), there were many other exhibits about Vancouver's rich maritime history, along with displays on pirates through the ages (Arrrgh matey!). Here I am inside a diving hardhat. The weight of the full hard-diving setup is incredible and the work very hard and dangerous. Next to it was a version of "The Newt Suit," a 1-atmosphere diving suit invented by BC native Phil Newton. Daddy's SFU lab did some testing on the earlier prototypes in the early 1990s. The unique aspect of the Newt Suit is that the diver remains at 1 atmosphere no matter what depth they are at (can go 1 km deep!), with no risk of decompression. In essence, it's a submarine that you wear. 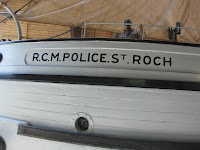 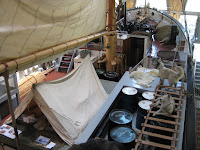 The museum was literally built around the RCMP cutter St. Roch. It operated from 1928-1954 in the Arctic, and the major claim to fame was that it was the second ever ship to cross the Northwest Passage. It was actually the first to go west-east (Vancouver-Halifax) in 1940-1942. The Captain was Henry Larsen. This was done during the Second World War to help establish Canadian presence and sovereignty in the north. In 1944, it went back to Vancouver through the Northwest Passage east-west. Before then, the first passage was achieved by Norwegian Roald Amundsen and the Gjoa in 1903-1906. Daddy's seen the Gjoa twice in his visits to Oslo, and we'll be visiting there too very soon! To get a head start, the museum had an exhibit of photos taken by Amundsen during his journey. 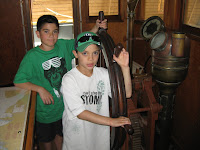 The St. Roch was built with Australian gumwood timber. The hull is very round with a shallow keel at the bottom. This allowed it to get lifted by ice rather than crushed when the winter set it. The tradeoff is that the shallow keel made it incredibly tippy. Besides the crew, there was also an Inuit family of seven on board to serve as guides, who all shared a tiny tent on the front deck atop a hatch! And there was a big dogsled team too! 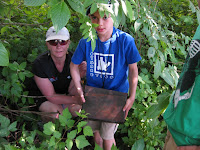 A bit delayed, but here's a picture of us geocaching around Burnaby Lake. We've found a number of them now, and are looking forward to geocaching around the world (www.geocaching.com). This was taken Saturday near the sports fields, where we also found LOTS of mosquitoes waiting for the Cheung/Hoffele buffet to arrive! Each of us probably fed over 40 bites!