Yesterday we went to Chania (hun-YA) and looked around a little. at one of the restaurants they were painting something and two geese fell in the paint. Then we went to the South-west side of the Island and waded to the part of the beach on Elaphonisi (Deer Island) there were a lot of sand sculptures such as sand castles and turtles. We also learned that the Egyptians lived on Crete Because we saw some pyramids and and a sphinx and I found another one. It was a great beach with Pink sand! It was also great for the paddles. To get to the beach there was a one lane tunnel through the mountain.
Lots more pictures from Chania and Elaphonisi! 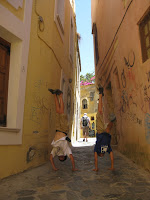 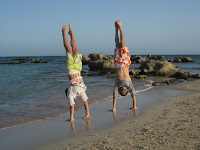 more handstands in an alley and on the beach! 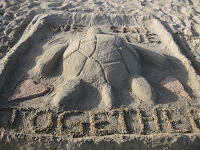 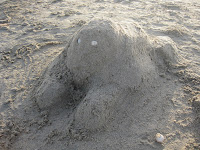 on the right is a turtle that some people made out of shells they made the words we can live together. on the left is the sphinx that I found. it is so authentic that it does not even have a nose!