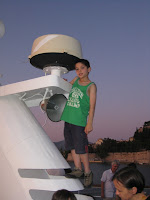 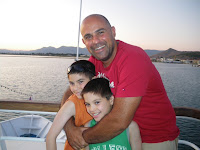 Sunday we arrived in Nafplio! We took a bus from Athens to Nafplio. when we got here the first thing we did was go to the beach with Daddy's student Shawnda and met her friend Adam, who is doing his Ph.D. with Igor. While we were at the beach, Daddy signed in for the conference and got busy meeting up with all of his friends. We know a lot of Daddy's friends from four years ago at the same conference in Slovenia. On the left is a picture of us with "Big Bear" Stelios from Greece, out on a boat cruise the first night.

More pictures from Napflio so far! 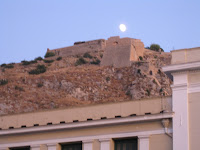 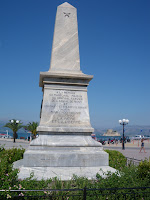 On the left is a picture of Palomedes fortress overlooking the city. To get to it, you have to climb 999 steps. Legend says that there were 1000 steps, but an officer on his horse broke the last step. When you look at it, you have to look WAY up, so it must be super-hard to attack it. It's so hot here that the defenders would not have to boil the oil before pouring it on the attackers! Pity the poor slaves who had to build it up there. I read that there are 8 small fortresses and one larger one there. One day this week we want to climb it, but maybe very early in the morning or late in the evening.

On the right is a picture of a war memorial near the port. It's to honour the French soldiers who fought with the Greeks for independence against the Ottoman Empire. It's fitting that it's here because Napflio was the first capital of modern Greece after the Ottomans. 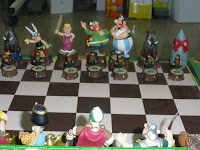 In Napflio there are lots of roadside shops and restaurants. It's great because all the cafes are out on the streets, many of them closed to cars and made from really nice marble. The old town is very small but with lots of interesting nooks and crannies to explore. There are lots of shops, and many of them have chess sets for sale. The coolest one we've seen so far is an "Asterix and Obelix" chess set, with the other side being the Romans (lions for knights, Ionic columns for rooks). The Gauls have actual obelixes for rooks and wild boars for knights. We also saw "smurfs" and "gangsters" chess sets at the same shop. With the smurfs, the knights were smurfs riding on snails. There were also lots of ancient Greek army sets, like from the Trojan War, with boats for rooks and wooden "Trojan Horses" for knights of course!
Posted by Anonymous at 07:37