July 17 Sunday 2011
Yesterday we went to the pool for 2 1/2 hours, then we learned how to play a card game called Canasta which was a little bit hard for Jacob. Andreas was supposed to take us to Knossos at 11:00. but Andreas had to help his mother cook lunch for us because we were going to their house for lunch. So instead at about 1:30 Andreas took us to his parents for lunch. after the lunch there was just a little less that half of the food left. Andreas' dad wanted to know where the river behind our house was because usually when there is a lot of trees in Greece there is a river.lunch ended at about 4:30. then we went to a beach where you had to climb to get to it while we were there we saw a live octopus Andreas went close to it to make it spray ink.

July 18 Monday 2011
today we swam for 1 1/2 hours in the pool then we went into town because mom and dad wanted to buy a phone and a phone card. after that we went to the Archaeological Museum of Knossos then we went tot the beach and played there for about 1 1/2 and played the paddle racket game with andreas' new lighter rackets and his " special racket game balls "after that we actually went to the ruins of the palace. part of the palace was rebuilt how Aurther Evans thought it looked like but you see what he rebuilt and the old parts. around Knossos is where the Minotaur legend was. the real parts of the frescoes that were found were put in the museum but they made replicas of the found pieces so that it could make them look more like they were. 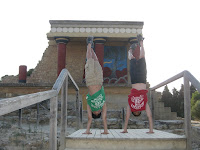 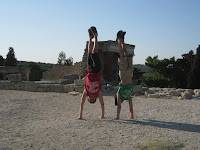 Daddy's note: The Minoan columns are "upside down" in the columns get wider at the top. The theory is that it started with placing large trees for columns with the trunk upside down so that the trees do not grow down into the ground again. Therefore, the handstands at Knossos is especially fitting!
Posted by Anonymous at 07:36