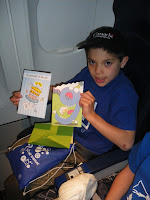 The "EU" part of the ChEUng Sabbatical Adventures has officially begun, as we're now blogging from Greece! Happy 9th birthday to Jacob on our departure day of July 8! The boys started with a final gymnastics workout at Kerrigans, and the owner Rory had a farewell BBQ party for us at his house with the high-performance boys that we've been training with. They really enjoyed training with Kerrigans and learnt some new skills and training techniques. Thanks for welcoming us!

The flight was in two parts. The first was to Frankfurt, and we flew over the "Land of polar bears" through the Arctic. We landed in Frankfurt after a 10h flight at about 2pm local time, then took another flight to Athens, arriving about 10 pm local time. It is HOT in Greece, and it was still 26oC even around midnight as we took the metro and then dragged our heavy bags to the hotel. The boys were real troopers through all the portaging, and I told them that they're just training for hanging out with Olaf in a few weeks' time! 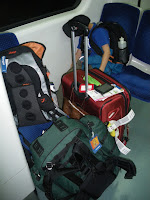 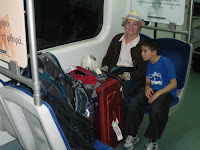 Taking the Metro from the airport to downtown. Even at 11pm, the metro was pretty busy with all the young people just starting to head out for the night! 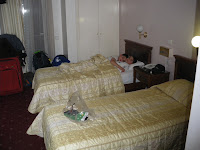 Our room at the Hotel Balasca in Athens is about the size of my chamber in the lab! Next stop is Napflio, a 2.5h bus ride, for ICEE 2011!
Posted by Unknown at 06:08

Email ThisBlogThis!Share to TwitterShare to FacebookShare to Pinterest
Labels: Greece