The Coolest Man in Crete! 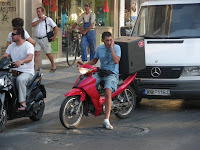 The guy on the left here must be the coolest dude in all of Crete if not Greece itself. Check it out, he's on a delivery motorcycle whizzing through urban Iraklios, not wearing a helmet, talking on his cell phone with one hand and smoking a cigarette with the other - a triple crown of stupidity! As you may guess, there's lots of motorcycles and almost no helmets around here. Some other dopey observations include guys carrying helmets on their arms as elbow pads while riding, and the dumbest of all was a guy flying down the highway with his helmet on but NOT buckled, and therefore using his left hand to hold his helmet on as he went!
Last set of pictures from Crete! 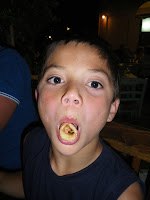 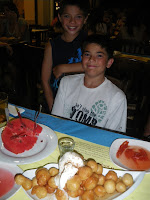 Our last dinner in Iraklios was at a fish tavern downtown that was terrific. Had awesome kalamari and seafood risotto with octopus in it. So much good food for cheap, and then when we thought we were going to explode, they brought out dessert of watermelon, loukamales with ice cream, candied fruit, and raki! So we had an early celebration of Zachary's 11th birthday, walked around the old fort and pier, then crashed at the airport for 5h before our flight to Oslo. See you all there!
Posted by Unknown at 17:27