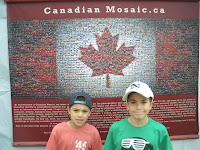 Summer weather arrived here in Vancouver just in time for Canada Day, and also the official start of my sabbatical! Debbie went with Victoria Harrison and a group of hikers on the ferry to Bowen Island and a 17 km hike, while I took the boys down to Canada Place for the Canada Day party. CP is down at the waterfront, and very easy to get to on transit. We first took the bus to Metrotown to stock up on bubble tea, Chinese buns, and egg tarts. From there, we took the skytrain straight down to Waterfront station - easy! On the left the boys are at "The Canadian Mosaic" exhibit. An artist is making a huge Canada flag with portraits of everyday Canadians, about 36,000 or more including us. Look for us in the white part of the flag when it's ready in time for Canada's 150th birthday in 2017!

Lots more pictures of how we spent Canada Day! 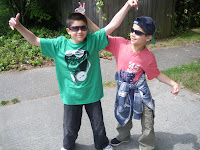 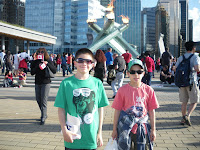 The boys and I have been hooked on "The Lazy Song" by Bruno Mars, especially the music video and the chimp dancers. So on the left, they're busting their best hip-hop move. On the right, we're at Canada Place, where they lit up the Olympic Torch for the day. Lots and lots and lots of people out enjoying the great weather and the party. Right as we got there, completely to my surprise we literally bumped into my SFU labmates Sanja Savic-Kallesoe and Klaus Kallesoe! Hi Sanja and Klaus! 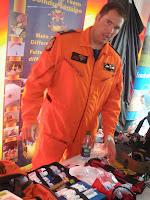 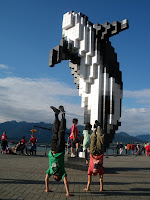 At the armed forces tent, a Search and Rescue technician was displaying all of his massive array of equipment. They have to be prepared to operate in almost any condition and any climate. Some of their gear included SCUBA diving gear, parachutes for getting to the incidents, climbing and rappeling gear, snowshoes, and plain old walking! They also had extensive emergency medical kits, and are trained to survive with minimal gear for days at a time. I talked to one SAR Tech about the Arctic study that we did, and he didn't seem too keen on volunteering! On the right is another of our "Handstands around the World" shots, at Canada Place in front of the "Digital Orca." That's 4 handstand shots and counting! 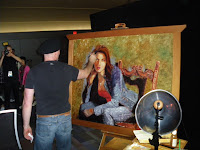 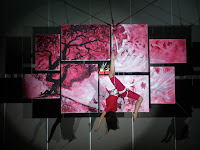 In the convention centre itself, there were several exhibitions. A major one was by Tom Meire (on the left), who made over 100 portraits of famous Canadians. He was inspired by the party in Vancouver after the Canadian hockey win at the Olympics, and decided he wanted to celebrate how much Canada has contributed to the world. The portraits included athletes (Terry Fox, Wayne Gretzky, Donovan Bailey), political figures (Sir John A MacDonald was right next to Louis Riel, who he ordered executed!), musicians (Sarah MacLachlan, Glen Gould, Neil Young), actors (John Candy, Michael J. Fox), scientists (Frederick Banting - discover of insulin, David Suzuki), and lots more. One Canadian we learned about for the first time was Louis Cyr, who was the world's strongest man in the late 1800s. He could lift 500 pounds with a single finger! On the right was an aerial artist who was painting a picture while in the air! 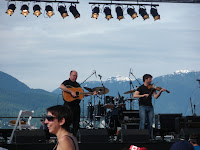 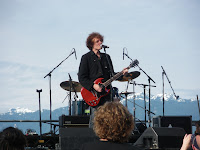 One highlight for me were the two concerts we caught at the main stage at Jack Poole Plaza, where the Olympic Torch is. The setup was beautiful, with the musicians in front of a backdrop of Burrard Inlet and the North Shore mountains behind. The first act (left picture) was "The Irish Descendants" from Newfoundland, and the Gaelic-themed rock was awesome. Their last song they sang unbelievably fast and then sped up from there! The final concert was a blast from my youth, indie act Grapes of Wrath from Kelowna (right picture). They were one of my favourite bands during university days, and I pretty much still know almost every word of every song they played. 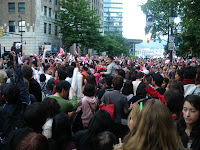 Canada Day parade was pretty huge and packed, lasting over 1 h. We took a spot in the 5-deep crowd near the end of the parade route. The boys thought that the Star Wars crew were the best. The coolest part of the parade came at the end, when the last couple of parade members somehow got disconnected from the rest of the parade. This old truck with a live band was one of them, and quickly got surrounded by lots of people dancing in the streets to their music. So they just played on for about 15 minutes before they finally managed to convince the crowd to let them stop!

Lots more pictures of how we spent Canada Day!
Posted by Unknown at 02:20