Today we started by going to the aquarium, NOT with the speargun! there were a lot of unusual animals including silver cheeked toad fish(like a puffer fish without spikes). there were also octopus(Jacob thought the fake octopus on the front of the building looked like tentacles with a peanut on top), jelly fish, lobsters and lots more.  when we were walking home we went along the water and it was very wavy so even though we were on a wall we were being hit by the surf.when we got home we went to the pool and packed our stuff because we are leaving tomorrow at 5:15 in the morning. So we hung out with Andreas and stayed up all night. Then Andreas took will take us to the airport between 12:00 and 1:00. 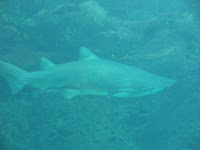 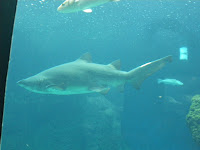 on the left there is a sand shark and on the left is a sand bar shark
yesterday at 4:00 we left the apartment with Andreas and went to a beach there we played rackets and then we played canasta with Andreas(daddy didn't play). Jacob and I were on a team and Andreas and mommy were on a team. one turn Jacob took two cars instead of one the extra card he picked up was a Joker(a wild card). 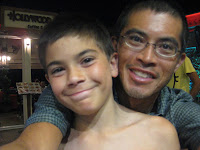 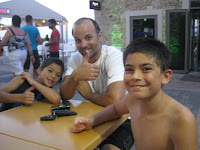 in these pictures we are waiting for our gyros. it was funny because the waiter didn't even speak Greek! after the gyros we had a crepe with chocolate and biscuits this was also funny because he forgot the biscuits.
Posted by Anonymous at 17:18